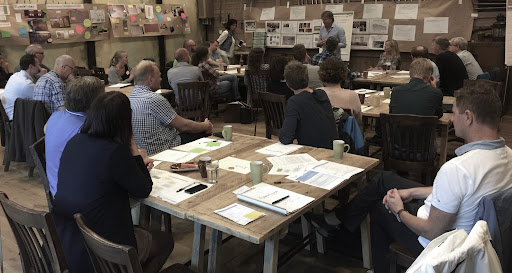 Eivind: One of the many management innovations that came out of Toyota in the 50s & 60s, and arguably the most famous, is the just-in-time and kanban system. Famously developed through trial and error by Ohno´s team in the motor shop (One can read more about that in “The Birth of Lean”). As Toyota expanded, and continued to develop it´s Just-in-time system, the role of the manager also changed. Once the Just-in-time and kanban-system controlled production coordination, managers and supervisors no longer needed to coordinate work. Instead, the job of managers was turned on its head. No longer responsible for coordination, but responsible for quality and people development.

This is the opposite of how most companies are organized with quality management centralized (quality department, ISO systems etc) and work coordination decentralized. Which brings us to what is possibly a key insight into what determines Toyotas success. People Development through technical problem solving. A fast, and sometimes easy (depending on local legislations) way of cutting costs in downturns is to lay off people and then rehire when the cycle returns. However, according to Jeff Liker (Toyota under Fire), for Toyota this doesn´t make sense. These are workers who are highly skilled in both their actual work, and in continuous improvement and problem solving. Exactly the people needed when a company must find ways to improve efficiency to stay profitable in downturns. Toyota famously went from profitable at 80% capacity to profitable at 70% capacity during the financial crisis in 2008. GM went through bankruptcy.

Even so, the traditional western mindset seems obsessed with best practice and the dominating mental model is that competence and skills are commodities that can be bought. Once the commodity is in place (be it leadership competence or technical expertise), it´s up to managers and supervisors to coordinate the work and control the process they are responsible for.

Michael: throughout the seventeenth century, Prussia, a small German state conducted an interesting experiment. First, it professionalized its army (traditionally composed of farmers, criminals, ne’er do well, and dilettante aristocrats). Second, as this worked famously, it applied the new bureaucratic methods it invented in terms of rules, roles and career to administrating the country. As a result, the country was run as the military, and the military started taking many central service jobs of administrating the land. The resulting model impressed XIXth century thinkers as an enlightened system in which rational calculus replaced the whims of aristocrats, and where merit in terms of dogged work and obedient loyalty would be rewarded by careers. The main idea was that the leader set the strategy, the organisation (mostly in terms of hierarchy: who reports to whom) and the rest are disciplined into carrying out instructions.

In the XIXth century, in the US engineers also learned to study work following the methods pioneered by Frederick Taylor (and, in all likelihood, in Southern slave plantations) and define the one best way to applied by workers – workers, presumably couldn’t be expected to both work and reflect upon their work. Prussian rulers were fascinated by automata, American engineers by mechanization, the mindsets converged in treating people as machines that had to be controlled in the finest details to be more productive (and paid more – most operators quit, so people had to be paid much more to stay – and then they still quit).

Less known is that the fabled bureaucratic model of the Prussian army led to a humiliating defeat by Napoleon’s ragtag revolutionary army. Prussian military thinkers such as Von Clausewitz and Von Moltke realized the cumbersomeness and inflexibility of the bureaucratic model. They reckoned that in the “fog of war” (the confusion of the battlefield), friction is the norm (the simplest task become impossibly difficult) and the strategy is only realized inasmuch as frontline officers interpret correctly the plan, are competent in carrying it out and are followed into battle by their men. They came up with an alternative model of leadership:

The result was a different kind of army with bureaucratic administrative functions but very effective frontline battalions as western allies learned to their grief in two world wars. Von Moltke and co. had devised an antidote to the bureaucratic sickness that consumed Europe.

In the mid XIXth century, a Scottish journalist, Samuel Smiles published the first self-help book called… Self Help, in which he extolled the virtues of ingenuity and hard work as a path to success. The scandalous thought for the times was that one no longer needed to be of noble birth or rich to become a gentleman. The Japanese translation of the book sold over a million copies in Japan of the Meiji era – a Japan that was seeking a modernist ideology for a radically transformed country. One avid reader was Sakichi Toyoda, the founder of the Toyota dynasty, who concluded that he should only surround himself with men ready to bootstrap themselves and learn by doing and constant initiative.

We keep interpreting lean tools through the bureaucratic lens of tighter control of workers’ work – more defined standards, more rigorously applied – this completely perverts the original intent of these tools. Lean tools were study methods to learn to better coordinate sites, machinery and people in the terms of Kiichiro Toyoda, the inventor of just-in-time and see problems as they occur with the andon invented by Sakichi Toyoda. Eiji Toyoda, the man who created Toyota as it is now, contributed suggestions to the system, as well as encouraging the development of the Toyota Production System and the Chief Engineer System as learning methodologies.

The motivation here is not to apply the plans higher up have dreamed up through the organization they have designed – because plans never survive contacts with reality and silo organisations lead to division and strife – but to respond as best one can to challenges, self-study one’s response and progressively learn more adaptive responses.

The upshot is that the only thing you really control in an organization is people’s training: the experiences they have, the technical formal knowledge they’ve acquired, the overview they’ve developed by learning about other functions, the social network they’ve built up. Machines can be replaced – not a person.

Rational calculation shouldn’t be used to reduce humans to a number (think of purchasers that will agree to anything you say and not listen to one thing, they only care about the price rebate they demand) but as a start to observation, reflection and discussion to come up with solutions that go beyond delivering a single output but seeking to learn to find – together – better outcomes.